[from Lionkil’s space] Weybosset in native Narragansett Indian language meant, crossing place, at a narrow place that Indians used to walk from one side of the bay to the other, presumably during low to mid-tides. Weybosset is just south of the convergence of two rivers, Woonasquatucket and Moshassuck, flowing south into the Providence River, at the upper end of Narragansett Bay.

Weybosset was also where three important native Indian trails met, one coming down from the north, the second up from the southeast Mount Hope region called the Wampanoag Trail, and the third up from Connecticut in the southwest called the Pequot Trail. 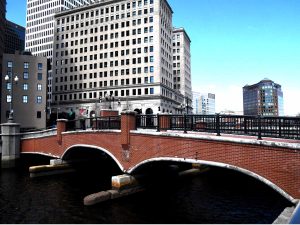 Later the Weybosset name was given to a wooden colonial toll bridge built by the early settlers across the Providence River at the entrance to the Cove prior to 1660. Roger Williams (1603-1683), founder of Providence and the Rhode Island Colony, served for a time as the toll taker at Weybosset in his elderly years. Gradually the Cove was filled in and built upon in what is now called Downtown Providence.

[from Clio] The first bridge was poorly constructed and fell into disrepair by the late 1670s, so the townspeople and their livestock waded across the ford until a second bridge was constructed in 1711. It was destroyed by a flood and rebuilt in 1719. A fourth bridge, funded by the colony’s lottery in 1745, was carried away by a gale and record high tides in 1761. During those years, farmers from the meadows to the west crossed over the bridge and sold their produce in what is still known as Market Square. The first drawbridge, constructed in 1764, allowed square rigged ships to unload their West Indies cargoes at the Bowen Street Wharf north of Steeple Street. The seventh bridge was destroyed by the great gale of 1815; its flood waters are recorded on a bronze plaque on the wall of nearby Market House. In 1816 a fixed type replacement closed the cove to “sea going” vessels.

[From: Sons of Providence by Charles, Rappleye, Chapter 1] ” . . . the Weybosset Bridge—or, more prosaically, Muddy Bridge—a sturdy expanse eighteen feet wide with a creaking draw in the middle that was the town’s first public enterprise, operated for a time by Roger Williams himself. It served mainly to carry droves of cattle and hogs that farmers brought to town for slaughter. Directly across the bridge at the foot of Prospect Hill stood Market Square, an open common crowded during the day with carts, loose livestock, and shoppers seeking produce. Stalls lined the “cheapside,” where artisans and tinkers sold housewares and handicrafts.”

The trend to widen the bridge began in 1843 and continued in earnest until 1940 when its width reached 1147 feet and Guinness Book of Records acknowledged Providence as having constructed the widest bridge in the world. During its history it has supported two market places, Central Fire Station, Union Railroad Depot, Horse Car Depot, and a post office. By 1983 only parked cars and congested traffic could be seen on the decking which covered the river. In 1984, after more than 300 years of bridge building, the city and state decided to reclaim the rivers and constructed the bridges and river park which are here today.

Today, the Weybosset Street Bridge is part of the Waterplace Park and Riverwalk, built in 1994, where popular WaterFire celebrations are held during some summer evenings. 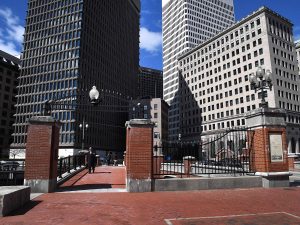 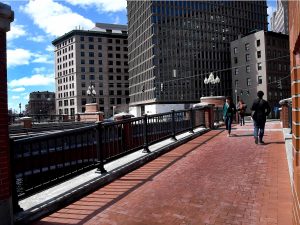 Click on any of the images below for a larger version of maps and images showing the bridges down through time. 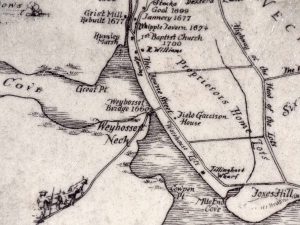 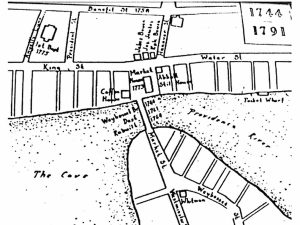 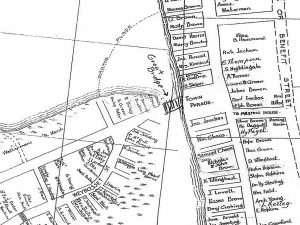 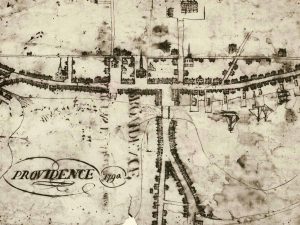 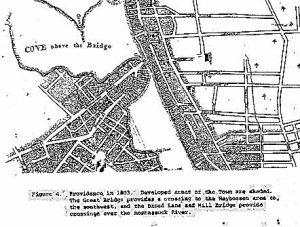 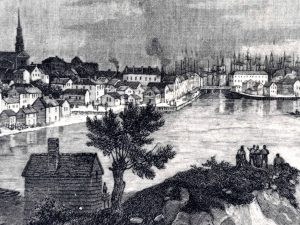 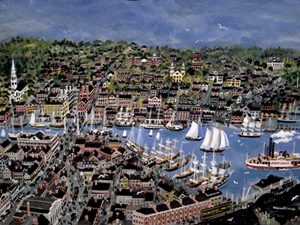 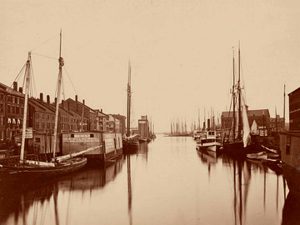 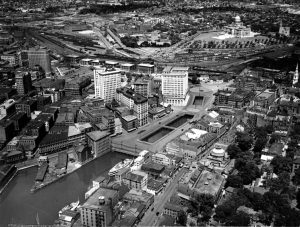 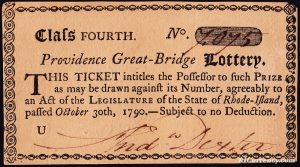 Click here for William Weeden’s description of early Providence, the Colony of Hope.