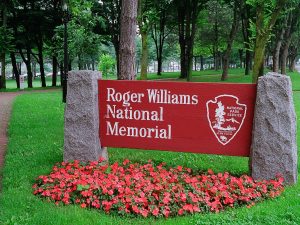 Located near the State House between the Moshassuck River and North Main Street Street in downtown Providence, the Park celebrates the original settlement started by Roger Williams in 1636. 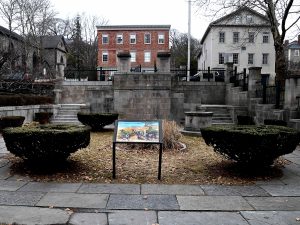 Information about Roger Williams and the founding of Providence is on display in the Visitors’ Center in the Antram-Gray House at the corner of North Main and Smith Streets in downtown Providence, The location of the spring that provided water to the early settlers can be found in the adjoining park. 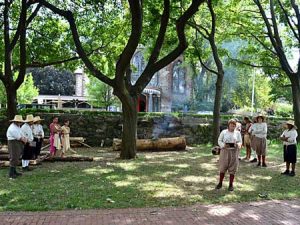 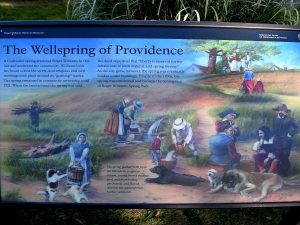 Activities take place in the park near an interpretive sign describing the original well at the site. 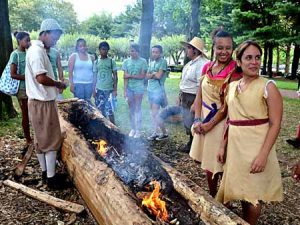 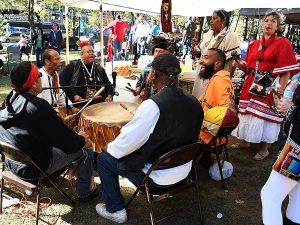 Above, young people work on creating a log canoe using the method that the aboriginal people used, and members of the Pokanoket and Narragansett Tribes hold a pow-wow at the Memorial. 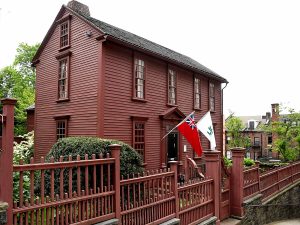 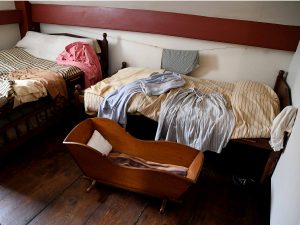 Above,the 1707 Stephen Hopkins House, the oldest surviving house from the original Towne Street along the Providence River, was moved up the hill to Benefit Street in 1927. Like many of those original houses, it housed enslaved people as in this third floor room.

Below is a marker on the southeast corner of Waterman and North Main Street (next to the bus tunnel) marking where Williams’ house first stood. Also below is an illustration of pre-colonial Providence and a painting by artist Jean Blackburn depicting the town of Providence about 1650. If you were on what is now College Hill and looked west, this is what you would have seen. The Great Salt Cove fills the center of the picture. Over on the far right, the large flat area is where the State House now stands. The road that runs across the middle ground is Towne Street which became North Main Street. At center is Roger Williams’ house and house lot. Just across the street is the fresh water spring. Large hill in the upper left is Neutaconkanut Hill. Oysters, clams, quahogs and lobsters were found here in abundance. Salmon would run up both the Moshasuck and Woonasquatucket Rivers . Ducks and geese by the thousands stopped here on their way south in the fall and also on their way north in the spring. As Roger said, this truly was “God’s Providence” to him in his distress. 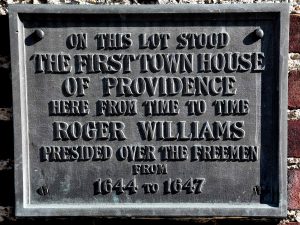 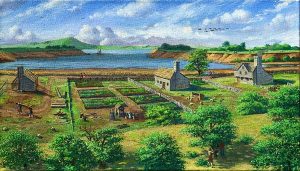 Click here for more information about the above marker.

Click here for the Wikipedia entry about the life of Roger Williams.

Click here for a terrific timeline of Roger Williams’ life.

Click here for a 52-minute video of author Alan E. Johnson’s overview of Roger Williams’ life and influence on the United States Constitution.

Click here for a page on the Weybosset Bridge in early Providence.

Click here to see the place where Williams stepped on shore to establish Providence.

Click here for a web page with links to the early records of the Town of Providence.

Click on the map below for a Google satellite map. 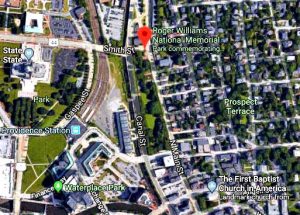 There is metered parking on both sides of the park.