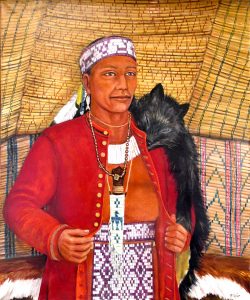 A contemporary painting by artist Ruth Major of the Massasoit Ousamequin, who met the Pilgrims in 1621, and who was reburied at Burr’s Hill Park in Warren, RI in 2017, is on display at the George Hail Library in that town. In the portrait, we see the following as described by Pilgrim Edward Winslow in 1621 and published in London in Mort’s Relation in 1622:

And, as described in a letter by Emmanuel Altham in 1623:

Winslow and Hopkins visited the Massasoit Ousamequin at Somams (now Warren) in July, 1621. 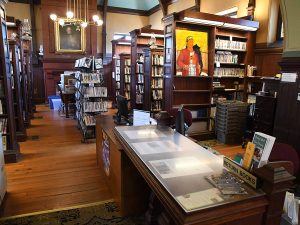 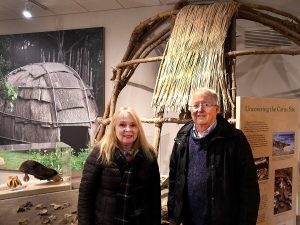 (Above, left) The painting is on display behind the desk at the Library. (Above, right) Ms. Major poses for a photo with Sowams Heritage Area Coordinator Dave Weed in front of a wetu exhibit at the Salt Pond Visitors Center in Eastham, MA. Since 1990, artist Ruth Major’s historical paintings and portraits have been exhibited on Martha’s Vineyard, where she lives, and in Maine, Rhode Island, Connecticut, New York and Illinois. Ms. Major has a Masters degree from the Mass College of Art and Design and is currently a fine artist and author. She has worked with several archaeologists and historians on the development of historical paintings and is descended from a long line of merchant mariners, artists, scientists and writers who taught her to be a keen observer and to honor her ancestors. More about the artist can be found at ruthmajor.com. 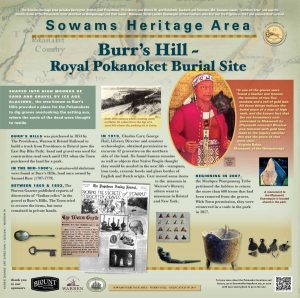 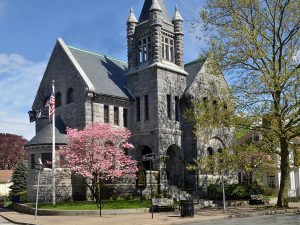 The painting is now included in the design of an historical marker that will be placed at Burr’s Hill Park. Descendants of the Massasoit’s Pokanoket Tribe have done presentations at the George Hail Library as well as Dr. Weed. The painting will remain on display at the Library until Thanksgiving, 2020.