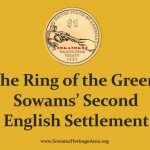 Though Roger Williams was the first Englishman to settle in 17th century Sowams, he was quickly followed by Rev. Samuel Newman and his followers from Weymouth who purchased land from the Massasoit Ousamequin in 1643. After constructing a meeting house in what is now Rumford, RI, the settlers laid out over fifty farms, each fronting END_OF_DOCUMENT_TOKEN_TO_BE_REPLACED