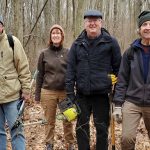 On the former Bowen-Haile-Nunes Farmstead, a rare surviving representative of a 17th century Narragansett Bay saltwater livestock farm now given over largely to development, stands the oldest extant house in Warren. The Warren Land Conservation Trust acquired approximately sixty acres of the original farm land on the eastern shore of the Palmer River that now is END_OF_DOCUMENT_TOKEN_TO_BE_REPLACED 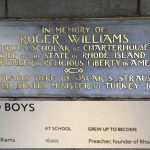 Roger Williams, the founder of Rhode Island, grew up in Smithfiled, London, in the early 1600s before moving to America in 1631. During that time, he witnessed dozens of people being burned at the stake in West Smithfield for their religious beliefts. He knew Captain John Smith, who settled Jamestown in 1609, as he would END_OF_DOCUMENT_TOKEN_TO_BE_REPLACED 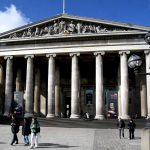 The British Museum in London cares for around 90,000 contemporary, historical and archaeological objects that reflect the diversity of culture spanning more than 12,000 years across a third of the world’s landmass. Among its holding are the Rosetta Stone, the Elgin Marbles, and a head from Easter Island. The British Museum also holds thousands of objects from the Americas including END_OF_DOCUMENT_TOKEN_TO_BE_REPLACED 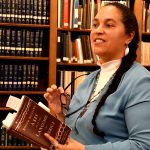 Tomaquag Museum Executive Director Lorén Spears discussed a new edition of Roger Williams’ A Key into the Language of America which brings a Narragansett perspective to William’s 1643 best seller at the Rhode Island State Library on March 4, 2020, Rhode Island Secretary of State Nellie Gorbea introduced her to the assembled audience before through the END_OF_DOCUMENT_TOKEN_TO_BE_REPLACED